The Three Endings to The Vanishing American

There is a fascinating tale behind the three very different endings applied to three separate published editions of The Vanishing American.  Fortunately, Zane Grey's youngest son, Loren Grey, sorted all of this out in an article entitled "The Multiple Endings of Zane Grey's The Vanishing American" which you can read in its entirety here.  Here are excerpts of Loren's words from the article: 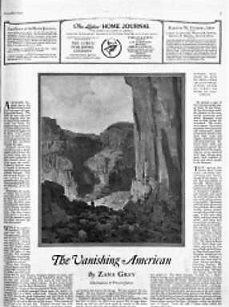 "It [The Vanishing American] was published as a serial in the Ladies Home Journal in 1922 and has Nophaie, the Indian hero of the book, succumbing from the ravages of the terrible influenza plague of 1918, which killed more than 3,000 Indians on the reservation alone. An unexpected twist to this sad tale is provided when Marian, Nophaie's white sweetheart, goes to view the body and discovers that Nophaie has turned white instead of black. This is one for scholars and students of Zane Grey and his sociological ideas to speculate about."

[Though not published until many years after Grey's death, this "ending" is placed here in the sequence because it was written prior to the 1925 Harper's edition, but rejected by Grey's editors] 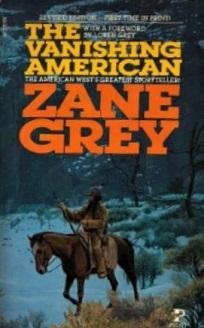 "Despite this sad ending [in The Ladies Home Journal serials], the story itself evoked a storm of controversy, with several angry letters being written by the missionary groups involved to Harper and Brothers demanding that certain "offending" paragraphs be removed from the book when it was to be published ...Dad and Mother took this opportunity to write a brand new ending... In this, Nophaie survives the influenza epidemic... and, of course, the shooting. He returns to Marian and as they watched the decimated remnants of his tribe ride off into the sunset, he and Marian plan to marry and live on the reservation.

This portion of the rewritten story was not looked upon too favorably either by the moguls at Harpers. However, although they accepted it, they published it with one rather judicious alteration, which I believe was done without Dad's knowledge
or consent.

The only place I could institute a change as far as the total book was concerned was in Pocket Books first paperback publication in 1982. Previously, this section had been included in an anthology published some years earlier by Tower entitled Zane Grey's Greatest Indian Tales. In these editions I restored all the material that had been excised and finished off with the new ending in which Nophaie and Marian do plan to marry."

The Harpers and Brothers 1925 Ending: 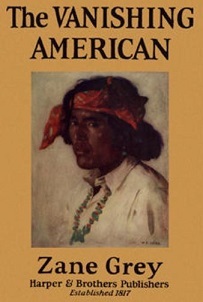 "In this [1925 Harpers and Brothers edition] Nophaie suddenly appears at the house where Marian is staying and dies of an unexplained affliction which has little to do with anything. I'm sure this was done to avoid even the implication that an
Indian man could marry a white woman. I do not know what Dad's reaction was to this when he found out about it, but he was probably furious. However, it was too late because the book was already published."

← Nophaie
The Fourth Ending →
The Three Endings to The Vanishing American