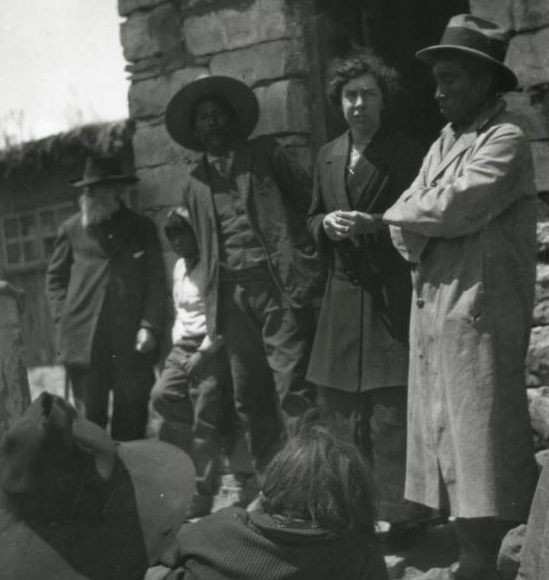 Zane Grey's The Vanishing American is a marvelous fiction built around a framework of a Navajo man who was murdered for trying protect his daughter.  Grey's words are hard to surpass.

However, we want to end our literary adventure with an account few have read, even accomplished Zane Grey experts.  In 1931, a University of Arizona student wrote a paper called "A Biography of John and Louisa Wetherill."  The intimacy of the story told by the student, Francis Gillmor, shouts out to considerable time spent with the Wetherills.

We are providing an excerpt from Gillmor's paper that re-shapes our understanding of the murder that was so central to The Vanishing American.  In doing so, we arrive at a perfect ending to this presentation.

About this time the agent sent from Tuba City for the daughter of Tatatinidoian, the Man Who Would Not Eat the Pollen, but her father refused to send her to school.

The agent came to the trading post and asked about it. "This man has been trading with us for a long time and we respect him,” said Esthon Sosi [Louisa Wetherill]. "I’ll talk to him about this —and I think he’ll send his daughter to school.”

She sent for the Man Who Would Not Eat the Pollen and told him of her conversation with the agent. "I have told him that you are more intelligent than most men, that you will understand the importance of having the girl go to school. Now if you do not send her, I shall have lied"

“You told him that?"

“Then, Esthon Sosi, I will send her to school. But this is the truth of the matter. I went to Tuba. I had never refused to send my daughter to school. I wanted only to talk to the agent. But when I came in and was about to shake hands with him.  He pushed me away and told them to put me out, that he was busy. 1 do not like to be treated like a dog. I decided that my daughter should not go to Tuba to be treated so." But the proud Navajo sent his daughter in from his hogan to the government school.

His first opposition, however, still rankled with the officials at Tuba City, and they sent men to his hogan to bring him in for punishment. They left from Kayenta without telling where they were going. Not until the interpreter came back with the story was it known that the white men had planned to clamp handcuffs on the Man Who Would Not Eat the Pollen when he came forward to shake hands. The ruse was successful, but that night the handcuffed Navajo was somehow released by his friends and escaped.

With the affair still unsettled, three more men were sent to bring in the Man Who Would Not Eat the Pollen. Though he was old and crippled with rheumatism, he was one of the strongest men on the reservation. They planned that one man should stand guard at the door and that the other two should put

the handcuffs on the Navajo. Desperately fighting, the Man Who Would Not Eat the Pollen flung one man against the side of the hogan and tried to free himself from the hand of the other. As he fought, the fallen man sat up and shot him in the back.

The three white men returned to the agency and gave themselves up, saying that they had shot in self-defense when The Man Who Would Not Eat the Pollen had attempted to draw his own gun. The trial brought out the facts, and it was shown that the Navajo could not have used his gun, that it was in the holster and wrapped in cloth, and that the cartridges were so small that they had to be wrapped in cloth to hold them in, and finally that the Navajo had been shot in the back.

But for a little while feeling ran high on the reservation. The worried officials at the agency asked some Navajos what attitude they intended to take on the killing of the man. "We must ask Esthon Sosi," they replied.

When the trouble was finally settled, the agent came to Kayenta to apologize to Esthon Sosi for a letter which he had written to her at this time. I thought they meant that you had been talking against the agency. Then I realized that they only wanted to talk the affair over with you."

Esthon Sosi was mystified. "What letter are you speaking of?" she asked. "The letter I sent to you by Hoskinini-begay," he replied.

"But I never received that letter."

"It is just as well," said the agent.

Esthon Sosi, still wondering, sent for Hoskinini-begay. He stood before her, lean and gray, his face already lined with age. Here was the man who with his father had fought all night in defense of the moving people; the man who after council and feasting had with his father first agreed to the Wetherills staying at the place of Moonlight Water; the man who when their supplies were low had shared with them his own food.

“What happened to that letter you were to bring me from the agent?" Esthon Sosi asked him,

"That letter? I tore it up. That letter was no good."